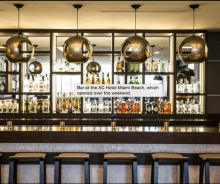 Sometimes when paving in paradise, you have to go out of your way to not put up a parking lot.That was developer Robert Finvarb’s take on the plot of land at 2912 Collins Ave., which once served as a contractor staging zone and future parking area for the Miami Beach Edition across the street. “The site juts into Collins, so it basically is in your face as you’re going north,” said Finvarb, who has developed several Marriott-branded hotels in South Florida and elsewhere. “Having a surface parking lot on such a critical site...would be a missed opportunity.” He saw potential at the spot to build a property under an European import that Marriott teamed up with in 2011. That joint venture formed AC Hotels by Marriott, which had more than 90 hotels in Spain, Portugal and Italy but none in the United States. Over the weekend, the 150-room AC Hotel Miami Beach opened its doors — with 174 parking spots already up and running to accommodate the Edition, another Marriott brand that opened late last year. The site was the fifth AC Hotel in the country after locations in New Orleans, Kansas City, the Washington, D.C. area and Chicago. The company has a pipeline of more than 50 more AC Hotels planned in the United States, said Tina Edmundson, global officer for Marriott International’s luxury and lifestyle brands. Unlike the other many other properties Miami Beach hotel projects, the AC Hotel Miami Beach is built new from the ground up. Finvarb said that gives the lodging an edge over the bulk of the offerings in Miami Beach, which tend to be renovations of historic properties that have to meet strict preservation standards. “We were able to leverage a lot of the design elements that are pervasive today such as floor-to-ceiling glass, spacious bathrooms,” he said. “It’s not just dressing up a historic building that’s 60 years old and doesn’t necessarily address the needs of today’s travelers.” He said the brand is “really Marriott’s answer to providing a product for the millennial traveler.” “It’s all based on the millennial travelers really looking for experiences, they’re looking for design and they’re looking for hotels that are located within exciting destinations,” Finvarb said. Pricing is also set to attract those on a slightly slimmer budget; Finvarb said the hotel’s location on the west side of Collins means fares can be more competitive. Earth tones dominate the decor with some bursts of color, especially in pieces of art on the lobby wall. Wi-Fi is free, the fitness center is on site and the rooftop pool has an ocean view. Rooms are outfitted with multiple power outlets and USB ports and TV sets that connect to Netflix and Pandora from a guests’s mobile device — “everything a millennial could want,” said general manager Alex Caceres. High ceilings and clean lines reflect the European origin of the brand, as does the tapas menu at the restaurant, AC Lounge. The hotel tapped Jennifer Massolo, founder of The Liquid Projects in Miami, to craft a food and beverage program that includes Spanish wines and a gin-and-tonic menu. “We want the locals to use this hotel as a local hub, if you will,” Edmundson said. As part of the effort to show Miami’s influence on the hotel, Wynwood gallerist Dina Mitrani curated the art collection. At a Sunday night grand opening, Finvarb committed to eventually give a work by artist Chuck Ramirez — which will first appear in the hotel — to the Pérez Art Museum Miami. For a weekend in mid-June, the hotel’s website shows that prices start at $269 a night. That’s a price point similar to two other new Collins Avenue hotels, the Hyatt Centric South Beach Miami — also developed by Finvarb — and the Aloft South Beach. Suzanne Amaducci-Adams, head of the hospitality practice group at law firm Bilzin Sumberg, said those brands are all trying to tap into the “lifestyle” category meant to draw young professionals who want amenities but not a huge bill. “They’re all competing with each other, they’re all new, and they’re all ‘luxury light,’” she said. “And the price point is less — but not everybody can spend $750 a night for a hotel room.” Read Full Article: Miami Herald