Kobi Karp Architecture and Interior Design (KKAID) have been in the business of designing living spaces for over two decades. Known for adaptability, the firm’s versatility is evident in their various projects. In terms of height, no other firm has such a drastic disparity between some projects versus others. KKAID is responsible for having designed the 1,200 foot tall Empire World Towers, which will, if finished, be among the tallest condominiums in the world and Miami’s first 1000 footers. Kobi Karp is helping lead the way in designing Uptown’s new leading high rises. The 649ft Chelsea, 473 ft Lima, and 437ft Park Lane tower are good examples. Their influence extends to Brickell Village as well with their 794ft Flatiron and 849ft 1101 Brickell Tower, which is a Leviev Boymelgreen project. Much of their bread and butter work is seen on Miami Beach and North Bay Village. By “bread and butter” I mean those projects which fill in the firm’s portfolio but don’t get much attention from the masses due to lack of height. The Lexi, Mei, Bel Aire are good examples. In analyzing some of the firm’s designs you will realize that there is a sense of dynamism that makes each design seem truly unique. It is hard t find clear parallels in their designs. This distinguishes KKAID from other firms which tend to develop a certain signature style that is incorporated into most of their designs. The implication is that KKAID executes the vision of the client rather than their own. 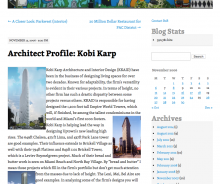